Please enter the correct digits
Your message was sent successfully

MaxPure EP is EGMO’s line of stainless steel fittings that meet - and exceed - the highly specialized surface finishing requirements of the bio-pharma industry as detailed in the ASME BPE (The American Society of Mechanical Engineers – Bio-processing Equipment) guidelines. 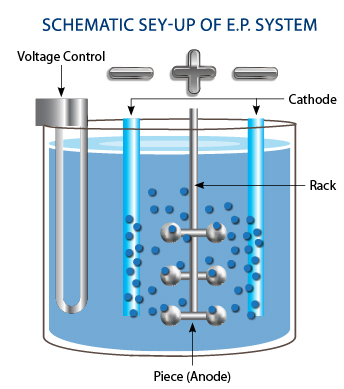 accumulated
know-how in the electro-polishing process during which EGMO
has optimized the following four critical elements:

a. The temperature of the electrolyte solution.

b. The amplitude of the cathodes and their location relevant to the product.

c. The level of acidity of the solution.

d. The amount of the time that the part is immersed in the solution.

NOTE: The ASME BPE guidelines are very clear, for example, that flash electro-polishing, i.e., immersion of the part in the electrolyte solution for a very short period of time, is unacceptable.

As a result, MaxPure EP products stand out from competing products in the following ways: 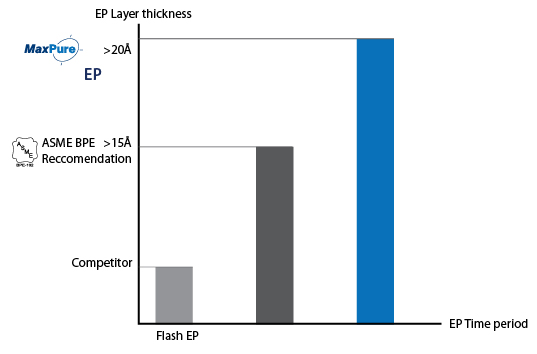 in the product’s base metal is “pulled” to the surface.
The thicker the chrome layer that forms on the product surface,
the more resistant it will be to corrosion over time. It will also decrease rouging.

The holy grail of surface finishing smoothness is to achieve as low an Ra (Roughness average) value as possible, where Ra is the arithmetic mean of the vertical deviations of the roughness profile from a mean line.

Rougher surfaces create more friction and wear quicker. Surface irregularities are potential sites not only for the formation of cracks and corrosion, but for the build-up of bacteria. Mechanical polishing and buffing, which is the first stage of surface finishing for metals, can achieve good Ra values, but inevitably leave microscopic metal particles and other contaminants on the top surface layer, as well as compounds and foreign matter trapped just below the surface layer.

The table below shows how MaxPure EP exceeds the ASME BPE quality requirements.

✔ The thickness of the electropolish layer, measured in Angstroms.
The thicker the layer, the more contaminant-free and corrosion-resistant the fitting is.